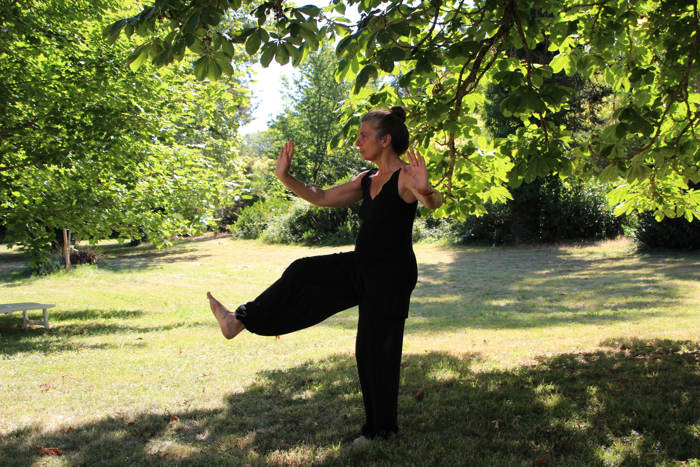 TAI CHI IS OFTEN DESCRIBED AS “MEDITATION IN MOTION,” BUT IT MIGHT WELL BE CALLED “MEDICATION IN MOTION.” THERE IS GROWINGEVIDENCE THAT THIS MIND-BODY PRACTICE … HAS VALUE IN TREATING OR PREVENTING MANY HEALTH PROBLEMS.   HARVARD MEDICAL HEALTH PUBLICATION, 05/09

As someone with a long held belief in the value of a more holistic approach to healthcare, I became interested in Tai Chi when I read how research was proving that this ancient Chinese martial art was providing the West with an outstanding anti-stress regime. However, I did not start studying Tai Chi until I moved to France in 2001 when I was given a DVD called Walking Gently on the Earth with Tew Bunnag which demonstrated the beauty and philosophy behind Tai Chi. At the same time I discovered a wonderful teacher; she did not speak English and my French was basic, so I had to learn the postures by watching and copying her movements, which, as it turned out, was a profound way of being taught the art of Tai Chi. It did not take many classes before I discovered for myself the effects Tai Chi was having on me at a mind, body, emotional and spiritual level and combating stress in a unique way.

Basically Tai Chi is made up of a sequence of movements, or postures, that are strung together to produce one slow, flowing sequence. Each posture has to be learned before the student can proceed to the next, so learning Tai Chi can at times be frustrating as it would appear to run contrary to much dance and movement therapy in which the participant gives free expression to an emotional sensation within the body. Initially I felt constrained by the need to follow a set sequence of prescribed postures but soon recognised the harmonising effect of the slow repetitive flow of movements.

At a physical (body) level Tai Chi helped relieve muscle tension. I have always held tension in my shoulders and have had back trouble for many years. Gradually my shoulder muscles became relaxed and I knew I was moving more freely. Chinese medicine views the body and mind as one entity. As I relaxed I recognised how my tense, rigid muscles had led to tightness and loss of freedom in other areas of my life. Chinese medicine says that tension creates blockages preventing the flow of energy, or Qi, through the whole body. I was trying to work through a creative block at that time and recognised I was storing the tensions relating to this in my muscles. So when I picked up a paint brush or a pen, my muscles tensed up. My tight muscles were preventing me from being open to new ideas and thinking creatively. Tai Chi provided me with a self-healing mind/body practice that integrated all aspects of myself. I had been provided with a resource to combat my “inner enemies”.

My back problems were also considerably reduced through an increase in body awareness. Practising the slow transition between movements enabled me to identify and make adjustments to bad postural habits. I recognised where I was “out of balance” both internally and externally.

Tai Chi is often said to make “breathing visible” as it helps establish a natural breathing rhythm by co-ordinating breathing into the transition from one posture to the next. You set the pace to match your breathing rhythm. I found that my breathing became more focussed, calm and, at times of stress, I was able to use this to maintain a calmer exterior. As I learned to breathe, relax and flow into the postures, I found I could reflect this in life situations; I could breathe and move through events and tensions.

Because of the emphasis placed on being centred, one of the most important lessons I learnt from Tai Chi was that of “letting go”. For example, just by moving into the opening posture, which demands that you find and work from your centre (Tan Dien), I feel immediately grounded and in touch with my core being out of which flow my values, self-identity and physical, mental, emotional and spiritual well-being.

Incredibly, Tai Chi helped me to recognise and silence my inner critic. I saw how I strived for perfection and was hypercritical of my progress and reflecting on this showed me how this was mirrored in my artistic endeavours! Now I could understand why Tai Chi was said to work at every level. Through the physical perspective I had come to understand what my body needed; mentally I had learned to become more focussed and calm; emotionally I felt more grounded and creatively I had been helped to recognise the roots of blocks. Although originally a martial art, Tai Chi today has been seen to be of tremendous benefit in recognising how we sabotage ourselves and diminish our potential as humans to live a fulfilled life. Stances that focus on warding off an opponent can equally be applied to the inner opponent and external opposition.

I am a visual person and Tai Chi fed my imagination. The many references to animals in the names given to the postures throughout the sequence encouraged me to identify with the energy each symbolised. We were encouraged to internalise the energy of the tiger or the joy of the crane, which in Tai Chi is called “the bird of happiness”. Bringing that energy into the postures gave my Tai Chi practice additional significance. The strength of the tiger; the joy of the crane – these are attributes that I can bring into my life. It also reinforced my understanding that we are all part of the flow of creation which provided me with a sense of both freedom and integration.

Finally, Tai Chi has become a spiritual and healing pathway for me. On those days when the movements flow I can “become” Tai Chi rather than “doing” Tai Chi. Then it becomes moving meditation. My mind is stilled and I know that I have become a harmonious whole, in tune with nature, creation and at one with every level of my being.