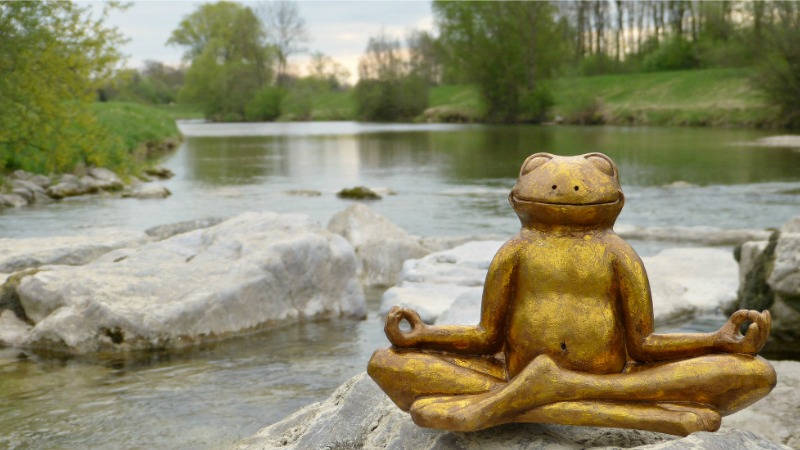 Originally stemming from ancient Buddhist thought, today mindfulness means many different things (Boyce cited in Wellness Professionals, 2016). It incorporates a range of practices, e.g. meditation; small acts of kindness; yoga asana (poses); pranayama (yogic breathing); body scanning; time in nature and so on. Importantly, however, mindfulness is not just a set of practices, but a way of being in the world; a deliberate state of mind in which we choose to act in a mindful way. This could mean seeking to be aware, present, thoughtful, considerate and compassionate towards ourselves and others as an integral part of our daily life (Hall, 2013; Wellness Professionals, 2016). Mindfulness can also be, then, a ‘basic training of the mind’ (Hall, 2013: 45 drawing on Siegel, 2010), a ‘disposition’ we tend towards (Barnhofer, Duggan, & Griffith, 2011), and a form of healing (Kabat-Zinn, 2015), as opposed to any one activity that we take up. The specific practices that help each of us reach a mindful state will, inevitably, be different. The internet is full of discussions asking why people struggle to meditate (e.g. Hilton Anderson, 2013). Perhaps this explains why so many things are now parked under “mindfulness”.

The core aim of a mindful approach to life is to build a higher sense of awareness, openness, observation and remembrance of things occurring around and within us (Dreyfus, 2011; Kabat-Zinn, 2015), whilst managing our resulting reactions and emotions in a balanced manner. For example, rather than judging whether emotions are “right” or “wrong”, we choose to simply observe a feeling and to just let it happen, without clinging on to the emotion (i.e. obsessing about something that has happened or could happen). Rumination and worrying are natural human states, but it can be harmful to remain in those states too long and too often, being linked to neuroticism and depression (Barnhofer et al., 2011). So we adopt a mindful approach to work towards recognising our emotions, allowing rather than suppressing them, and then letting them pass. The power of this approach is that, whatever we feel at this moment, we strive to understand that it simply “is what it is” (it’s neither “good” nor “bad”) and it will pass, as all things do (it’s temporary).

Since the 1990s, mindfulness has seen a huge growth in interest and a boom in research trials in the fields of health, wellness and therapy (Williams & Kabat-Zinn, 2011). Many studies can now provide clear evidence that practices adopted under (though not confined to) mindfulness can bring a variety of benefits. For example, incorporating regular yoga, meditation, breathing practices and stress-reduction practices into everyday life can bring significant benefits in maintaining all-around mental and physical health and well-being (American Osteopathic Association, 2016; Art of Living, 2016; Giovanni, 2016; Mahtani, 2010). Mindfulness meditation can significantly reduce stress levels, anxiety and even physical pain (Wake Forest Medical Center, 2011; Wellness Professionals, 2016; Williams & Kabat-Zinn, 2011). Given that a mindful approach helps us to avoid over-attachment to life events, and assists us to manage our mood and reactions, it is believed to have long-term and powerful benefits for our mental health, which it is argued need to start from a young age, instead of waiting for a major episode to occur in our lives (Hawn & Holden, 2011).

Mindfulness practices can give us a combined sense both of control and acceptance, enabling us to deal with change (Hall, 2013). Whilst these are two seemingly contradictory things (control and letting go), it is also about recognising those areas in life which we can and cannot control, or our sphere of influence (Covey, 2013). We can waste a lot of time worrying about things which are ultimately out of our control, which is unproductive and highly stressful (Covey, 2013). This will eventually affect our health if we continue to be in a high-stress situation. The cortisol hormone is released in our body when we face stressful or threatening situations. Whilst it is useful for real, immediate-threat situations, and was vital for early human survival, extended exposure due to continued stress has a very negative impact on the body and is increasingly common in modern life, leading to many more serious illnesses (Fell, 2013; Hall, 2013; Tirisula Yoga, 2015; Wellness Professionals, 2016).

Taking a mindful approach to life, both feeling control and acceptance, can help to increase personal resilience, or the ability to cope effectively with tackling and living through adverse situations in life (Hall, 2013). Inevitably everyone will experience some challenges and setbacks in their life, but practising mindfulness can help individuals to work more effectively through the issues, hold less internal stress, and ultimately move on more rapidly and calmly from the problems (Hall, 2013). It is not surprising, then, that psychotherapists are increasingly using mindfulness as part of treatments for trauma and depression to help build acceptance and embed new ways of being that can eventually replace negative and self-destructive habits (Colgan, Christopher, Michael, & Wahbeh, 2016; Eisenlohr-Moul, Peters, Pond, & DeWall, 2016; Heeren & Philippot, 2011). Quite a lot of research has been done on bringing mindfulness into the workplace too, particularly for high-stress jobs and areas such as healthcare, emergency and intensive care units where ability to cope under stress whilst also being compassionate can be very challenging (Gauthier, Meyer, Grefe, & Gold, 2015; Kabat-Zinn, 2015; Röthlin, Horvath, Birrer, & Grosse Holtforth, 2016; Van der Riet, Rossiter, Kirby, Dluzewska, & Harmon, 2015; Westphal et al., 2015).

Remarkably, mindfulness is not just found to change habits of mind and cognitive functions, but can actually alter the very structure of the brain in ways that are not yet fully understood (Davis & Hayes, 2011; Giovanni, 2016; Mcgonigal, 2010; Wellness Professionals, 2016) For example, the amygdala area of the brain has been observed to reduce in size in those who practice regular meditation. In health terms, this means our stress levels will be lower in the long-run too since the primordial “fight or flight” part of our brain is physically reduced  (Adrienne, Taren, Creswell, & Gianaros, 2013).

Since these are just a few of the very important issues mindfulness can help the individual to deal with, I would argue that it is like to be very useful and beneficial for many people are who seeking a holistic life coach. Although I personally might not introduce it under the banner of “mindfulness” initially, since I noticed that can be off-putting for some people.

American Osteopathic Association. (2016). The Benefits of Yoga. Retrieved from http://www.osteopathic.org/osteopathic-health/about-your-health/health-conditions-library/general-health/Pages/yoga.aspx

Art of Living. (2016). Benefits of Yoga. Retrieved from http://www.artofliving.org/yoga/yoga-benefits/top-ten-yoga-benefits

Fell, A. (2013). Mindfulness from meditation associated with lower stress hormone. Retrieved from https://www.ucdavis.edu/news/mindfulness-meditation-associated-lower-stress-hormone

Giovanni. (2016). SCIENTIFIC BENEFITS OF MEDITATION – 76 THINGS YOU MIGHT BE MISSING OUT ON. Retrieved from http://liveanddare.com/benefits-of-meditation/

Hilton Anderson, C. (2013). Why is Meditation So Hard? Retrieved from http://www.thegreatfitnessexperiment.com/author/chariander