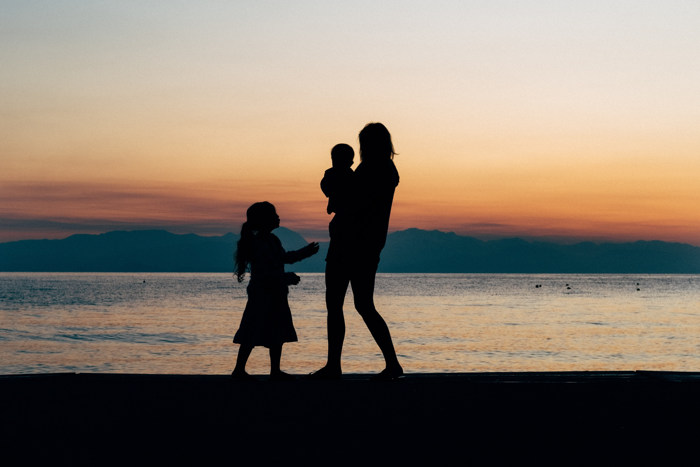 Transactional Analysis stems from the theory of Sigmund Freud that says each of us have parts of our personality that affect our behaviour according to different circumstances. It was developed in the 1950’s by Eric Berne who said that verbal communication is at the very centre of human social relationships.

His starting point was that when two people encounter each other, one of them will speak to the other. He named this the Transaction Stimulus and he named the reaction from the other person the Transaction Response. He developed Transactional Analysis as a method of examining the transaction between the two people, and how each person reacts to others in different circumstances.

Berne said that each person is made up of three alter ego states.

This is our ingrained voice of authority it stems from what we learnt and our attitudes from when we were young. We were conditioned by lots of older people such as our parents, teachers, aunts and uncles. Even made up figures such as Santa Claus and the Tooth Fairy. Our Parent ego is made up of a huge number of hidden and overt recorded playbacks. Typically expressed by phrases and attitudes starting with ‘how to’, ‘under no circumstances’, ‘always’ and ‘never forget’, ‘don’t lie, cheat, steal’, etc., etc. Our parent is formed by external events and influences upon us as we grow through early childhood.

The Nurturing Parent is caring and concerned and often may appear as a mother-figure (though men can play it too). They seek to keep the Child contented, offering a safe haven and unconditional love to calm the Child’s troubles.

The Controlling (or Critical) Parent, on the other hand, tries to make the Child do as the parent wants them to do, perhaps transferring values or beliefs or helping the Child to understand and live in society. They may also have negative intent, using the Child as a whipping-boy or worse.

The Natural Child is largely un-self-aware and is characterized by the non-speech noises they make (yahoo, whee, etc.). They like playing and are open and vulnerable.

The Adaptive Child reacts to the world around them, either changing themselves to fit in or rebelling against the forces they feel.

“The person who had feelings” story by Barbara Dunlap (see appendix) talks about how children can be moved from the Natural Child state to the Adaptive Child state by the influence of Controlling Parents around them and how this can evoke conflicts of feelings and emotions in the Adaptive Child. It also outlines how acceptance of a person being exactly how they are allows the positive feelings and emotions to shine through. To me this encompasses the power of Transactional Analysis in helping people to be themselves and to stop adapting to be what they think others want them to be.

The Adult in us is the ‘grown up’ rational person who talks reasonably and assertively, neither trying to control nor reacting aggressively towards others. The Adult is comfortable with themselves and is, for many of us, our ‘ideal self’. 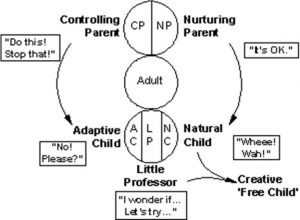 When two people communicate, each exchange is a transaction. Many of our problems come from transactions which are unsuccessful. 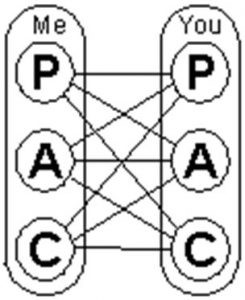 When we communicate we are doing so from one of our own alter ego states, our Parent, Adult or Child. Our feelings at the time determine which one we use, and at any time something can trigger a shift from one state to another. When we respond, we are also doing this from one of the three states, and it is in the analysis of these stimuli and responses that the essence of Transactional Analysis lies.

Parents naturally speak to Children, as this is their role as a parent. They can talk with other Parents and Adults, although the subject still may be about the children.

I often find this with my sister, I want her approval of my behaviour and therefore I often act in the Adaptive Child state which means that then I give power of myself over to her. If she doesn’t approve then I feel bad. However, when I work on behaving from and Adult state I find that our relationship is much more equal and I don’t feel as resentful about her behaviour.

Complementary transactions occur when both people are at the same level (Parent talking to Parent, etc.). Here, both are often thinking in the same way and communication is easier. Problems usually occur in Crossed transactions, where each is talking to a different level.

The parent is either nurturing or controlling, and often speaks to the child, who is either adaptive or ‘natural’ in their response. When both people talk as a Parent to the other’s Child, their wires get crossed and conflict results.

The ideal line of communication is the mature and rational Adult-Adult relationship.

I personally hate conflict and therefore if I find someone to be aggressive or very assertive I often revert to Adaptive Child state and find myself apologising for my behaviour or not expressing my true feelings or desires. I then often feel resentful about the conversation afterwards. Whereas, if I can find the courage to express my true wishes and desires in an assertive way (Adult ego state) I then find I feel much better about myself after the conversation, however difficult it might be.

Another book that is fabulous at outlining Transactional Analysis is “Counselling for Toads: A Psychological Adventure” by Robert de Board. ‘Toad’, the famous character in Kenneth Grahame’s The Wind in the Willows is in a very depressed state and his good friends Rat, Mole and Badger, are ‘worried that he might do something silly’ so they send him off for counselling.

Heron, the counsellor, uses the language and ideas of Transactional Analysis as his counselling method. Through the dialogues which make up the ten sessions, or chapters of the book, Toad learns how to analyse his own feelings and develop his emotional intelligence. He meets his Adaptive Child and his Adult along the way, and by the end of the book he is setting out on a completely new adventure. He begins his story thinking that all of his problems are due to the behaviour of his friends towards him, however by the use of Transactional Analysis he learns that it is how he reacts to other’s behaviour that is causing his feelings and by being enlightened he then manages to change his thoughts and therefore becomes much happier about himself.

Personally, I think that Transactional Analysis has limitations in that it relies on the client to be able to identify how the knowledge of their communications with people can change their future behaviours and doesn’t actually provide them with exercises to move forward and change their future. A more holistic approach is more effective where many different theories can be used dependent upon the client case that is presented to the therapist.

The person who had feelings – story by Barbara Dunlap

One night the person noticed that their LONELY and FEAR were growing, and beginning to stick out from under the patches. So the person had to go out to find some more ANGRY to cover  the LONELY, and got all the TOUGH that their parents could spare to cover their FEAR.

The person grew older and became very popular because everyone said that they could hide their feelings well. The person’s parents said one day that they had a PROUD feeling because the person had been so TOUGH. But the person could not find anywhere to put the PROUD feeling because the TOUGH was getting so big. The person had trouble finding room on their sleeve for any other feelings – the TOUGH and the ANGRY were all that showed.

Then after a time the person met another person and they became friends. They thought that they were a lot alike because they both had only TOUGH and ANGRY feelings that showed. One day the friend told the person a secret: “I’m not really like you – my TOUGH and ANGRY are only patches to cover over my LONELY and my FEAR.” The friend pulled back the edge of their TOUGH and showed the person their FEAR; just for a second.

The person sat quietly and did not speak. Then carefully they too pulled back the edge of their TOUGH and showed their FEAR. The friend saw the LONELY underneath. Then the friend gently reached out and touched the person’s FEAR, and then the LONELY……. The friend’s touch was like magic. A feeling of ACCEPTANCE appeared on the person’s sleeve and the TOUGH and ANGRY had become smaller. The person then knew that whenever someone gave them ACCEPTANCE, they would need less TOUGH, and then there would be more room to show PROUD….. SAD ……. LOVING…. STRONG…. GOOD…. WARM… HURT… FEAR….